There is a good article dedicated to the Natural Reserves under the title of “Fourteen nature treasures”, includes an interview with Juan Carlos del Olmo, WWF Spain general secretary, which was published last March 24th in the EL PAÍS SEMANAL “ESPAÑA EN POSITIVO” magazine.

Here you will find the article “Fourteen nature treasures”.

The article continues in the same way that we were thinking over during the “Ecotouristic businesses and products management” course, which is taking place in the EUDTH, Universitat Autònoma de Barcelona.

The nature reserves and the national parks are an instrument for the conservation of the environment, but also for the endogenous development of the cities. It is also understood by the IUCN (International Union for Conservation of Nature) itself, in its definition of the different protection figures around the world, where the II and V categories (National Parks and Protected Landscap/Seascape) anticipate the compatibility between conservation and public and recreational use. It is in the same topic where the Biosphere reserves work, within the framework of the MAB program, Man and Biosphere and Europarc, through the Sustainable Tourism in Protected Areas European Charter”

Following these principles, several referenced touristic organizations such as The Tourism Society, the World Tourism Organization or the Tourism Sustainability Group from the European Commission understand that the natural reserves as touristic destinations in the management manuals they are publishing and in the projects they are developing. One of the most recent examples was seen in the Tourist Destinations Sustainability Indicators presentation, which has been launched by the European Commission. Within the touristic destinations considered by the indicators, the Natural reserves are included. 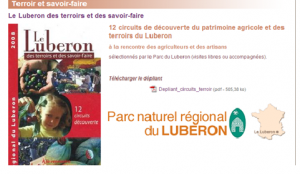 It is obvious that the “conservation” criterion is prevailing therefore it is the one which will make the destination viable against its competitors. An area in bad condition o at the risk of losing its natural values is an area which in the long term will be move out of the market and as a consequence it will lose its touristic and recreational function.

Most of the European Protected Nature Areas, specially National Parks and Natural Reserves, have assumed their function as a touristic destination. This is easily appreciable in some of their websites, which are an excellent invitation to discover the values of these areas and to enjoy in a way that the visitors became the best allies in the task of conservation and economic resources generation for the territory.

For example, the Regional Natural Luberon Park website, located in the Alpes-Provence-Côte d’Azur region (France) is and excellent invitation to discover its heritage, taste the local products in a responsible way, through the paths network on foot or by cycling holidays. The cycling holidays success –with an annual 8 million euros impact- has motivated the creation of a specific website about this activity. 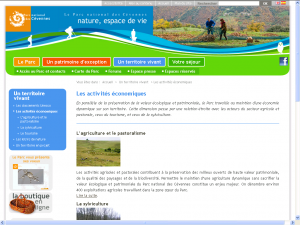 On the other hand, when it comes to value the local product there are very good examples such as Forest of Bowland, Lancashire (United Kingdom) or the Cévennes National Park in France which promote the activities that traditionally have been developed in these territories and also the tourism, as a key element for the conservation of the values of the Park, following the principles of the Sustainable Tourism in Protected Areas European Charter. 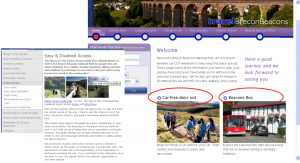 Finally, these protected natural areas are as well very sensitive with different groups which visit them. For example, supporting accessibility for everybody and a “smooth” mobility as it is shown by the Brecon Beacons National Park.

In our country, there are also some initiatives in the same line which have to be supported. Nowadays, with the economic crisis everywhere, the excellent natural heritage has to be a source of employment associated to tourism, stable and high-qualified, and it has to support the traditional activities through the appreciation of the local products, and the creation of new activities which give to the “Park” brand has an added value, both from the local product (craft, design, cultural and artistic production, among others) and from the attraction of the professionals to the area.

There is still much work left to do, if we consider the frequentation rates of our Natural Reserves and the available resources to become en true sustainable touristic destinations. Many of them have an important accommodation and tourism services offer, but, indicators such the businesses occupation, the employment creation or the presence of the touristic products in the promotion channels, are relatively low if we compare them with other European experiences.