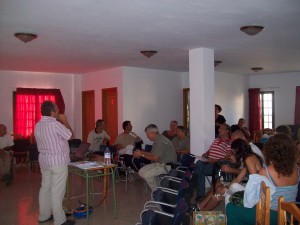 New experiences and ideas on walking and nature-based tourism in a forum organized by the National Park of Garajonay. A scenary in which the attendants were able to debate about the present and the future of a destination which is recognized by many hikers in Europe, La Gomera – Canary Islands.

One of the speakers was Adriana Ramón, presenting the Itinerànnia (www.itinerannia.net) project, which has created a 2500 km network of marked paths between the regions of El Ripollès, la Garrotxa and Alt Empordà, situated in the north of the province of Girona.

Likewise, SEEDA’s Francisco Guerra “Nutri” spoke about the communication of heritage values in the paths and about and experience in the province of Burgos.

Josep Capellà contributed to the forum in the last day, the 17th September, with information on hiking markets in Europe, the link between this activity and the european lifestyle (considering it as not only a tourist product) and the increasing importance that people who practice it give to responsible tourism. Capellà also presented examples of development strategies linked to the value of local products, like the Parc Nazionale delle Cinque Terre, in the North of Italy.

The forum concluded on Saturday with a guided visit to a few of the magnific paths of the National Park of Garajonay, passing through the Canary laurisilva leafy forests, one of the last remaining ancestral subtropical rainforests which occupied the Mediterranean area milions of years ago.